Race number one is in the books for the Super Truck Racing Series after taking to the asphalt at Auto Clearing Speedway this past weekend in Saskatoon. The Super Trucks were very excited to unveil Big Bore Drilling of Lloydminster Alberta as the title sponsor of the series for 2013 and beyond. The Big Bore Super Trucks brought their exciting brand of entertainment to the speedway on a beautiful Saskatchewan evening and thrilled the local fans to another wild (and unexpected) finish that left everyone on the property wondering how it all happened!

The excitement started to build already on Friday night when an unprecedented 12 trucks showed up for an open practice. This series was chomping at the bit to get the season started and these 12 'early risers' laid down a lot of rubber from the new Hoosier 2040 'spec' tire before practice was finished. The expectation of the competitors was for the fast times to be down to around the 15.10 - 15.20 second mark if possible and a couple of guys got close. The speedway surface is starting to show some age and the grip level was not to a point of consistently producing those times. An asphalt surface repair right in the 'braking zone' entering turn one has everyone challenged on how best to get through that spot without upsetting the balance on these highly crafted race trucks! Before the end of the night, seven of the trucks were turning lap times of 15.20 to 15.50 and everyone realized that Saturday night was going to be a brawl in the 100 lap main event! Rookie Dexter Hucul was in this group with his stunning #81 Dodge, as was rookie Scott Lucas in his Westar #27 Chevrolet. In an unfortunate incident, Kevin McLean expired the crate motor in his #00 NGC Compression Solutions Chevrolet. His competitors bound together to locate a spare motor from the #99 team of Doug Fischer and the engine swap was made. In typical Big Bore Super Truck Series fashion, the post race conversation around the campfire was filled with 'friendly' jabs at each other about what to expect when the green flag drops!

Saturday morning brought 4 more Super Trucks to the track when the gates opened at 10 am under a beautiful Saskatoon sun. The excitement of close competition has brought an influx of new (and returning) entrants, and this series was about to field one of the largest groups in three years. This storyline grows as there are two or three more teams expected for the next event back in Auto Clearing Speedway on July 13th. Terry Kovacs returned to the Big Bore Super Trucks after a three year break from competition and he was quick right off the trailer! Kovacs #43 was prepared by Dale Betcher of Wetaskiwin who has fielded multiple championship trucks with such drivers as Dave and Dan Saunders. Two time Champion Jamie McLennon had some suspension issues with his #33 Big Bore Chevrolet and Brian Sparks in his #2 Ford F-150 was presented with some challenges to the seals in his Ford 9-inch but returned to the speedway to post some mid 15 second laps. Of interest, this F-150 is the ONLY Ford crate motor in the series and it is turning some heads with the performance and sound coming out of the large 4" exhaust pipes! The new Hoosier 2040 tires had the crew chiefs searching for the right air pressure settings and the drivers said they were generally satisfied with the grip of the new tires. By the end of practice the #44 Cave Inspections Chevrolet of Dean Braham (aka Caveman) was at the top of the board.

Heat one had Terry Kovacs #43 sitting on the pole and if the smile on Kovacs face was any indication, he was glad to be back to competition in his Dodge. McLennon's #33 Chevrolet edged Guilett's #74 for the win. The #81 of Hucul fell victim to a burned clutch and would need to replace it for the nights 100 lap main event.

Heat #2 had Marwayne, Alberta's Ed Irvine sitting on the pole in his #48 Chevrolet. Irvine is also a rookie to the series and knew he was in tough when the green flag dropped. On lap 8 Kevin Mclean's #00 expired the second motor for the weekend proving to be a tough start to the 2013 season. It was very disappointing for this team as they had some strong runs at the end of 2012 and this was not the start they were anticipating. Brian Sparks Ford was pacing the field when the checkers fell after 15 laps.

Heat three saw a great side by side battle between the #33 of McLennon and the #74 of Guillet but Caveman's #44 was too strong for the field in the end as he gets his first win for 2013.

The final heat saw the #48 of Irvine running stronger and got into a battle with Red Deer driver Len Zimmer in his #3 'Shocker Racing' Chevrolet. There was contact between the two in turn four of the final lap sending Irvine into the 'spin cycle' and into the grass on the front straight to the excitement of the 2000+ fans in attendance.

The night air was cooling off and the jackets and sweaters were coming out in the stands as the Big Bore Super Trucks readied for the 100 lap main event. If the heat races were any indication, this was going to be a wildly entertaining race. The F-150 of Sparks was sitting on the pole with Wainwright, Alberta`s Gary Miller in his 'Racing For Breast Cancer Awareness' #79 parked right beside him. Hucul now had his hot rod ready with McLennon, Lucas, Guillet and Fitzgerald deeper in the line-up. It was no secret that there was to be a lot of side by side racing in the early stages to get to the front.

At 9:55 pm, the field pulled onto the speedway lead by the Auto Clearing Dodge Dart pace car. With the crowd cheering on their favorite driver, the green flag fell and Sparks lead the first 30 laps in a convincing manner. Sparks Ford was strong and his line around the speedway was near perfect. Lap 20 saw the #27 of Scott Lucas pull to the pits with a front sway bar dragging and he would return to finish 13th.

The racing up front was fierce with multiple side by side battles going on and it was not until lap 79 that the first yellow flag was high in the air. After catching their breath and analyzing their move on the restart, green was out again with a second yellow out again on lap 84. By this time the #20 Fitzgerald Aggregate Dodge was showing why it was a two time series champion truck. Neil `Fitzy` Fitzgerald showed he was strong and that he was serving notice that it was going to be tough to knock him off the top of the racing mountain. Fitzy had his hands full with the #99 Oil City Diesel of Doug Fischer who seemed to come out of nowhere as the race wore on! On lap 90 the 48 Chevrolet of Irvine spins bring out the third and final caution and setting up a strange set of circumstances. The #33 of McLennon had worked his way around Fischer just befoire the yellow and he was now on the outside of `Fitzy` on the restart with a ten lap shootout facing them!

The field was set and the flagging official signalled to the drivers that he would throw the green flag next time by. The Dodge Dart pace car pulled off the track on the back straight and the #20 Dodge and the #33 Chevrolet began the `head games` with the throttles of their 400+ hp motors. With Fitzgerald pacing, he picked up the throttle with McLennon in tow and the green flag went in the air. The restart became very confusing as the yellow lights came on around the speedway as the green flag fell. Fitzgerald got off the throttle as did some others but McLennon decided he had nothing to lose by staying `wide open` and was almost a straightaway ahead of the #20 Dodge realized that the race was actually on! There was no correction by the track officials and McLennon cruised to an easy win with Fitzgerald aggressively trying to make up ground as the checkers flew. Sparks had his best finish in a Big Bore Super Truck with the third spot on the podium. He too had stayed on the throttle during the confusion! Track officials at Auto Clearing Speedway expressed apologizes for the confusion but were held to the outcome as it unfolded.

With the night air cooling, the fans and family filed into the pits after the event to discuss the night events. McClennon "painted" the front stretch black in a smoke show second only to a Kyle Busch smoke show as Fitzgerald and the rest of the teams looked on!

See all you Race fans back here at Auto Clearing Speedway on July 13th for the second stop of the 2013 season........CHECKERED FLAGS EVERYONE! 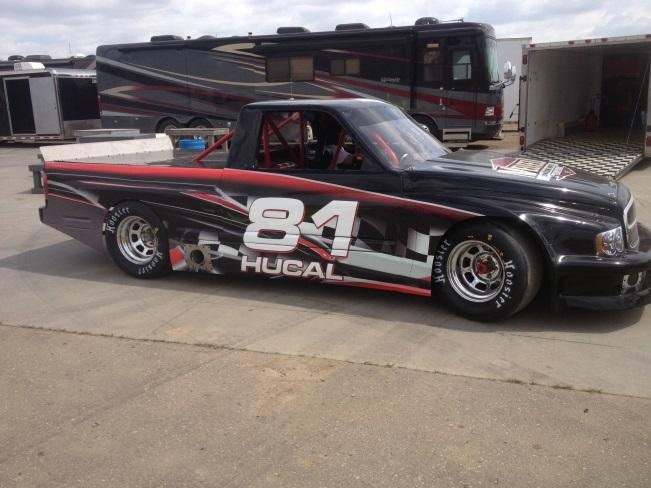 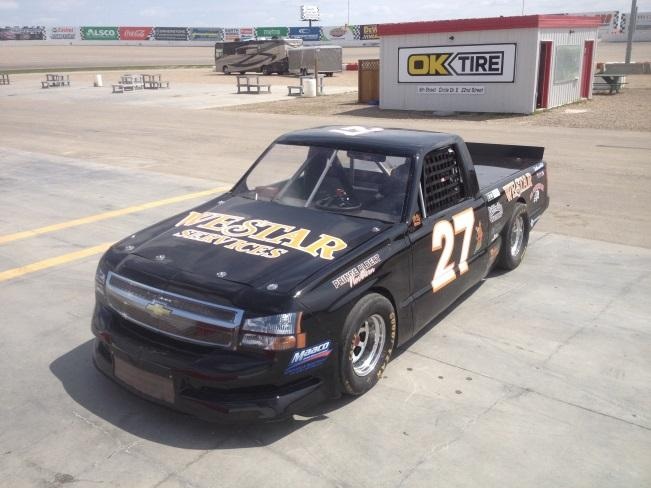 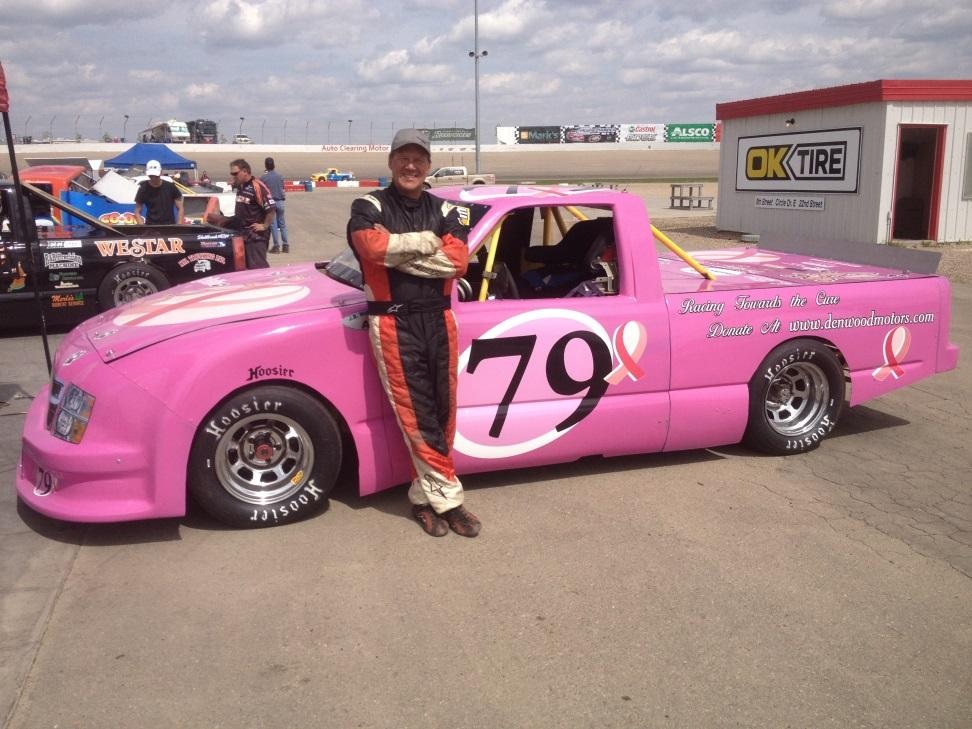 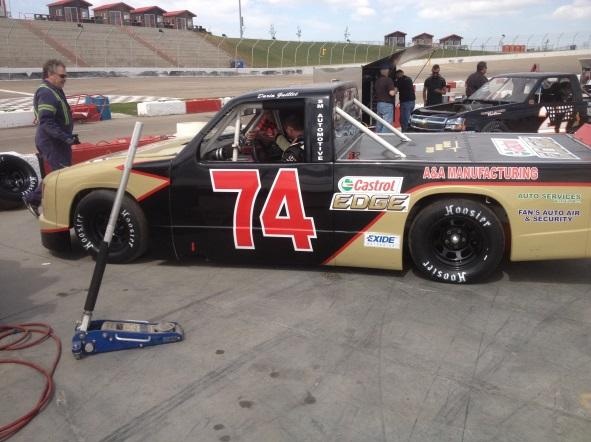 Kevin McLean swapping motors on Friday night in his #00 Chevrolet 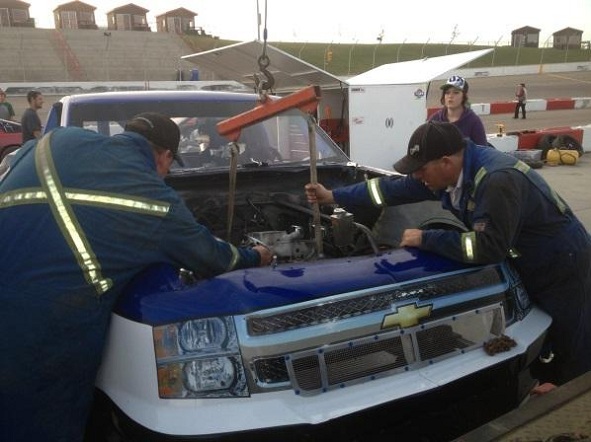 The Saskatchewan night sky backdrops the 15 Super Trucks that are about to take to the speedway for the thrilling 100 lap main event!! And thrill it did! 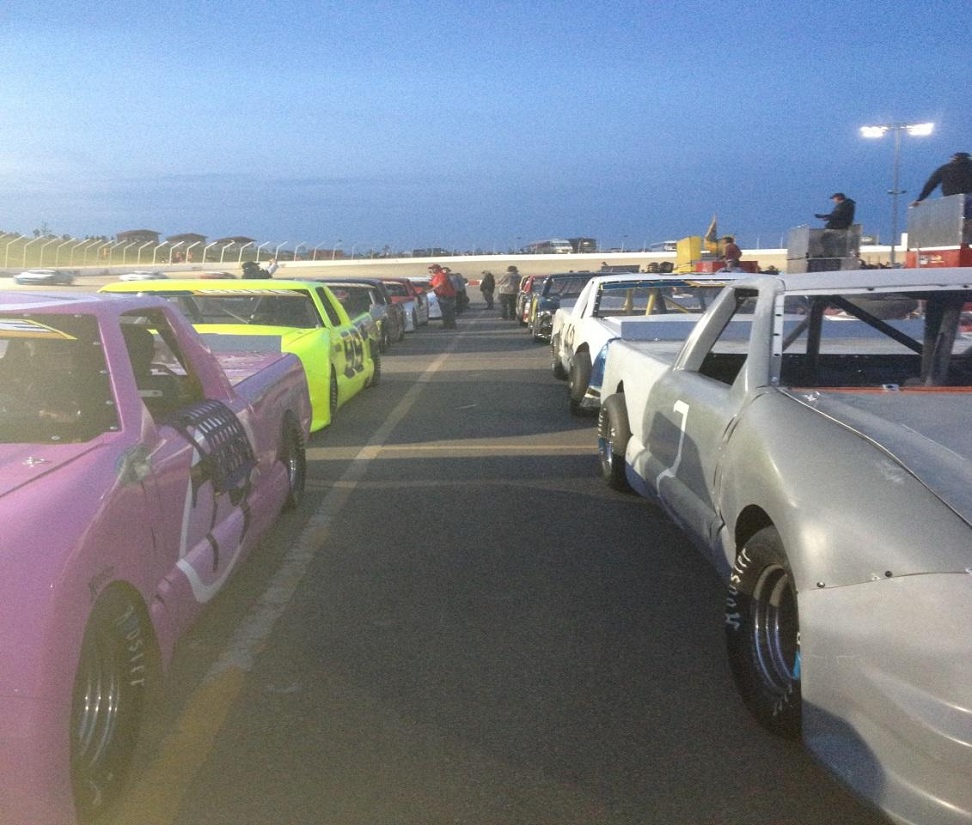