With racing in full swing around Canada and throughout most of the states south of the 49th parallel, the Canadian Super Truck Series is about to launch the 2013 season this weekend!! The competitors of this unique class of oval racers will be converging onto the pavement of the beautiful Auto Clearing Speedway located just a bit north of the city of Saskatoon, Saskatchewan.

A fresh season is always an exciting time for the drivers and crews as they pull their racing machines towards the speedway with their usual 'heap' of excitement, dashed with a bit of uncertainty of what the new season might bring! The cab of the hauler is filled with conversation from these excited 'grown up kids' of what the off-season changes to their hot rods might bring. Like Canadian cowboys running down the highway to another rodeo, the Super Truck competitors will be chewing on their favorite brand of sunflower seeds and talking very boldly of how many 2013 top three finishes are boxed up in that trailer they are pulling! It's a great time of the year when everyone enters the first event tied for the lead!

One such team will be the team of Ron Elder Sr. and Les Larsson who are proudly fielding two trucks in 2013. Ron and Les have a rich history of racing in Alberta and Western Canada that dates back to Edmonton's infamous Cobra Speedway and tracks in Ft. McMurray, Hinton, Wetaskiwin, Westlock and Drayton Valley. Their racing prowess includes both dirt and pavement competition giving them a bit of an edge over new comers to the Super Truck Series. From the high banks of Race City Speedway in Calgary (now closed) to the high speed 'dog leg' at Vernon BC's Sun Valley Speedway and the small 'bullring' of the dirt track at Calmar Speedway, the Elder/Larsson hot rods can always be counted on for speed and a clean appearance. 2013 will see the return of Ron Elder Jr. to oval competition in the seat of the #7 Co-op Performance Fuels Chevrolet and his teammate of Ron Larsson will be ripping the 'rookie stripes' off the back of his #18 Academy Petroleum Toyota Tundra for the new season! Larson comments that "2012 was a great learning year and I'm looking forward to putting that experience to the test this year." He adds, "I'm focused on getting my Super Truck through the corners better this year because with the 'crate' motors all being so equal, it's very important to roll the truck through the corners allowing the truck to come off the corner faster."

The Elder/Larsson racing team is a special team, consisting of very good friends and the Canadian Super Truck Series has benefited from the 'class' they bring to the track each week. The paint schemes indicate teammates but don't be fooled, both are racing to put their Super Trucks into victory lane! Stop by and talk to them after the races!

See you at the races in Saskatoon this weekend.....Good luck to all the racers! 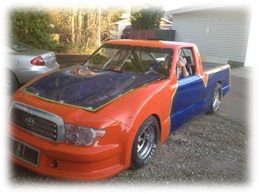 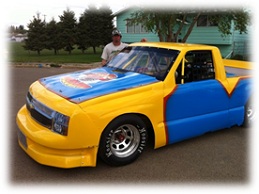